When you start and stop your Node scripts, the node.script object that contains the script will send messages out of its rightmost outlet to let you know about the status of the running script. These are the messages that the node.debug object receives and parses in order to configure its display.

There are five states of your program that we associate with starting and stopping a script in a node.script object:

Each of these states has its own specific collection of messages associated with it. These messages have a specific format.

When you query the status of your script each of these messages will be output, followed by the symbol success or error, depending on whether or not that part of the lifecycle has completed successfully or not.

Following the success or error symbol, there will be a reference to a dictionary (such as u23732230) which contains further information about the success of failure of your script.

Here’s an example of a typical message:

In the case of an error, you’ll also see a message describing what went wrong. Here’s what those messages will generally indicate, depending on the lifecycle event:

If your Node script crashes, node.script will attempt to restart automatically. You will see a message in the Max window as well ('Node child process quit, will restart').

If the Node script crashes again, immediately after starting, it will attempt to restart up to 5 times. After that, node.script won’t run again until it receives a script start message. 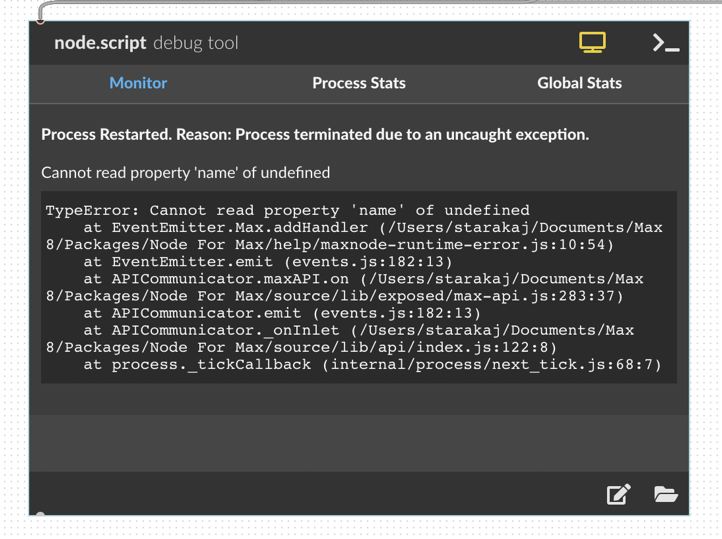 Following the success or error symbol, there will be a reference to a dictionary which contains further information about the success of failure of your script. The contents of those dictionaries vary according to the type of lifecycle. The dictionary contents are described below: