Node For Max is tracking the LTS releases of Node JS and the contained npm version associated with that release. NodeJS has a complex and very active release schedule ( https://nodejs.org/en/about/releases/ ), so things are likely to change.

A consequence of that release schedule is that the current version of N4M on your system and Max version might not always be on the version that you’d like to use - the LTS release may be more recent than the version you currently wish to use.

In addition, you may be using Node in situations where Max isn’t involved and you would like to have some consistency between the version of Node used by Max and the one you use for other work.

You can use different versions of NodeJS and npm than are bundled with the Node For Max package by pointing to the correct binaries. To do this, you can use the @node_bin_path and @npm_bin_path attributes to the node.script object for setting those paths. 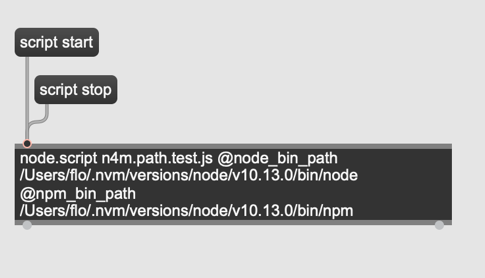 If you do set a custom path to either the Node or npm binary, we recommend that you always update the path of the other binary as well: mixing a bundled and local version may cause some incompatibilities to arise.

When you use a custom path for these binaries, Node for Max will add your custom path to the PATH property of process.env ( https://nodejs.org/dist/latest-v10.x/docs/api/process.html#process_process_env ).

This way, if you call Node or npm using functions from the child_process module, you can be sure that Node will use the same binary that you specified.