The process of freezing adds copies of files in the Max search path to the device file. Consider the example shown below. A Max device called MyEffect contains an abstraction called pumper. 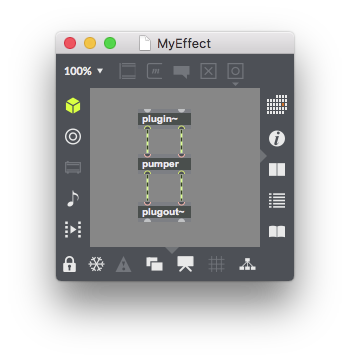 If we freeze this device and save it, a copy of the pumper patcher file will be added to the device. If we now open pumper, modify it, and save the changes, the frozen device is unaffected. However, what happens if we decide we want to work on our MyEffect device some more? At this point, there are two different versions of Pumper, the one in the device, and the one saved on disk. Which one should we use?

Overview of the Conflict Resolution and Unfreezing Process

Whenever you edit a frozen device, Max compares the files in the device with the versions on disk. If it spots differences, it disables the unfreeze and unlock icons in the patcher toolbar and enables the resolve conflicts icon, as shown below.


Resolving Conflicts for a Frozen Device