MC includes "wrapped" versions of all of the audio playback and recording objects (such as mc.groove~ and mc.record~). There are also mcs.* versions of some objects which can utilize multichannel signals directly.

Using the mc.* objects for buffer playback can create interesting effects, because you are running multiple parallel versions of the audio playback objects. By changing parameters to each of the devices, you can create complex results with relatively little patching. For example, you can use mc.groove~ modified by the deviate wrapper message to create a swarming audio track. 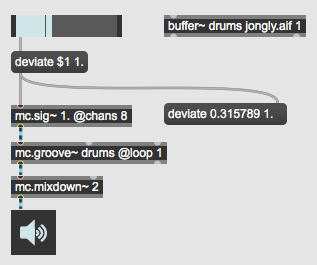 Using the mcs.* objects for buffer playback makes it easier to integrate audio streams with an MC-based patch. The mcs.* objects implement multichannel inlets and outlets that can be further manipulated with MC objects or routed to multi-speaker audio systems.

For example, we can use the multichannel output of the mcs.groove~ object as source material for a dual-channel fade-in patch. Since the multichannel audio is directly manipulated by the mc.*~ object, a multichannel signal will control the output levels of our file player. 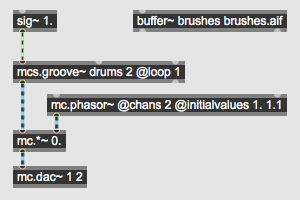 Recording multichannel audio is made easier with MC. Using the mc.sfrecord~ object, you can record multichannel signals directly to disk. 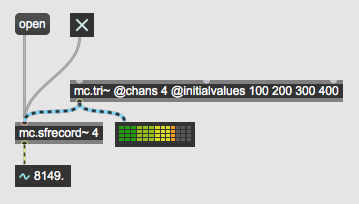 You can also record into a multichannel buffer using the mc.record~ object.