The MC Wrapper can manage polyphony without the use of the poly~ object. You can assign Max messages or MIDI events to specific MC channels and turn off processing for unused channels.

The Basis for Polyphony

Using the poly~ object, a polyphonic synth has a defined voice count. poly~ will load a separate patcher for each voice, which generates or processes sound independently from the other patchers. By contrast, with MC-based polyphony, there is a single patcher with MC wrapper objects set to a number of channels equal to the total voice count. For example, in this simple example, the mc.cycle~, mc.*~, and mc.gain~ objects have 12 channels. If you could control these objects independently, you could hear 12 independent voices. 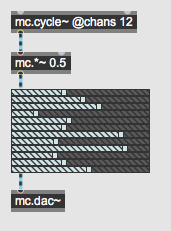 As with the Max poly~ object, the MC polyphony system provides all three benefits. DSP resource management is more involved with MC polyphony than with poly~; we'll cover that in the final section below.

The mc.noteallocator~ object accepts MIDI messages and directs messages to a specific target voice based on its internal voice allocation mechanism. Voices can be allocated either on the basis of MIDI note-on and note-off messages, or, more typically, by connecting a multichannel audio signal to the left inlet of mc.noteallocator~. In that case, when a note-off for an allocated voice has been received and the corresponding audio signal in the multichannel input goes to zero, mc.noteallocator~ marks that channel as available to be allocated when future MIDI note-on messages are received.

To specify a maximum number of voice numbers for allocation, supply a value for the @voices attribute. By default the @voices attribute has a value of zero, which means that if a multichannel audio signal is connected to the left inlet of mc.noteallocator~, it will use the number of channels in the incoming audio signal. If no audio signal is connected, mc.noteallocator~ will use a default of 15 voices (mc.voiceallocator~ works similarly but defaults to 16 voices).

If you prefer to allocate and control MC channels using Max messages instead of MIDI notes, you can use the more general mc.voiceallocator~ object. Here is an example driven by a metro object that allocates and releases voices using mc.voiceallocator~. 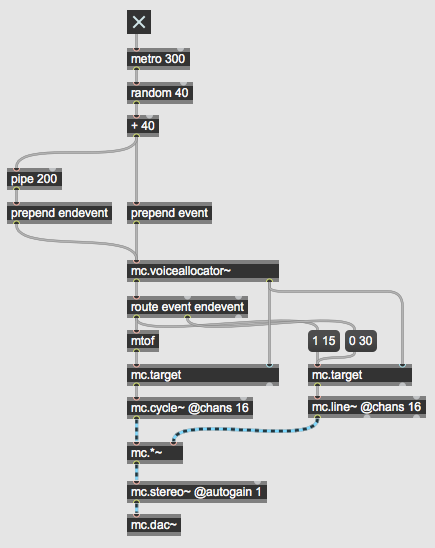 The mc.voiceallocator~ object accepts the endevent and release messages to free an allocated voice, so if you want to write your own audio analysis algorithm to detect when a "note" has finished playing, that algorithm could trigger these messages.

MC polyphony manages DSP resources by turning off channels of processing within each object using the MC wrapper. To enable/disable this behavior you need to use the @usebusymap attribute for each MC object.

A busy map is maintained by mc.noteallocator~ and mc.voiceallocator~ to keep track of which voices are currently defined to be playing ("busy"). These objects use the map to decide which MC channels are available for use; effectively implementing the first benefit of polyphony management mentioned above (new notes don't cut off playing notes).

Keep in mind that an object such as mc.cycle~ in the MC Wrapper consists of a set of MSP cycle~ objects. When you use the busy map, wrapper-based objects will turn off processing in individual cycle~ objects within an mc.cycle~. If fewer than the maximum number of voices are playing, this can save CPU resources.

MC objects not based on the wrapper do not implement busy maps because they have no way of turning off processing for individual channels.

To enable the use of the busy map for any wrapper-based object:

Here is the mc.noteallocator~ example above where all wrapper-based objects have @bz 1 included. 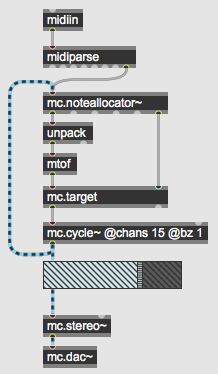 The @usebusymap attribute uses a patcher-global busy map. If you want to control wrapper-based objects in several patchers, or you have more than one mc.noteallocator~ or mc.voiceallocator~ in the same patcher, you can use named busy maps described in the next section.

The mc.noteallocator~ and mc.voiceallocator~ objects include a @name attribute that specifies a symbolic name to associate with their internal busy map.

To control DSP resources of a wrapper-based object using a named busy map:

Here is the mc.noteallocator~ example above using named busy maps: 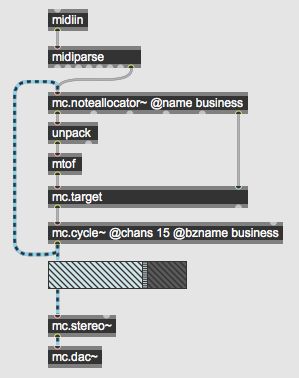