Max ships with support for two video engines on Mac platforms, qt (Quicktime) and avf (AVFoundation). Windows support is limited to qt. The default video engine on Mac is avf and on Windows is qt. Windows users wishing to extend the capabilities of the qt engine in 64 bit, should follow the instructions here. Users may install the viddll (VIDDLL) engine via the Package Manager, currently in public beta. The VIDDLL engine utilizes the FFmpeg library to provide support for a wide variety of file formats and codecs.

In most cases there is no need to change the default video engine. However there are pros and cons of each engine on each platform (Mac or Windows), and each architecture (32 or 64 bit). Quicktime is a tried-and-true engine with great compatibility, but 64-bit support is lacking on both platforms. AVF is modern and efficient but has less codec support and is Mac-only. VIDDLL brings 64-bit and more codec support to both platforms, but is currently in development and has memory issues when loading many files.

The chart below indicates the level of support for various features provided by each video engine on specific platforms and architectures. 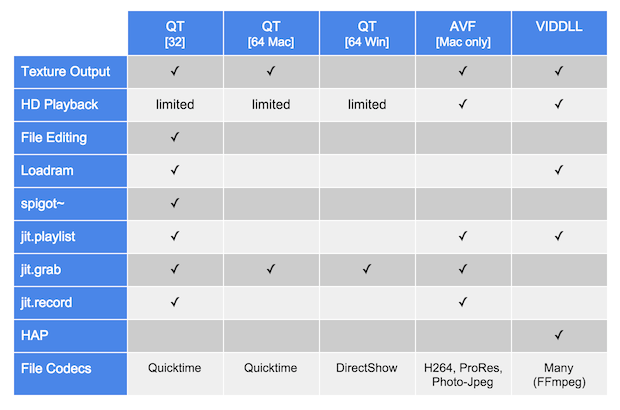