On Macintosh, the OS X application Audio MIDI Setup, located in the Utilities folder inside the Applications folder, is used to set up and describe your MIDI setup.

In addition to the standard MIDI drivers or drivers (CoreMIDI on the Mac and midi_mme on Windows ) or drivers you may have installed on your system, there are additional MIDI drivers available for use:

Max allows you to have multiple active MIDI driver objects in operation and work with multiple input and output MIDI sources. In addition to identifying MIDI inputs and outputs by name, you can specify an input or output source by a letter (a-z), or by using MIDI channel numbers above 16.

The MIDI Setup Window provides information on the availability and status of all available MIDI inputs and outputs, and lets you perform mapping between MIDI devices and names or numbers. 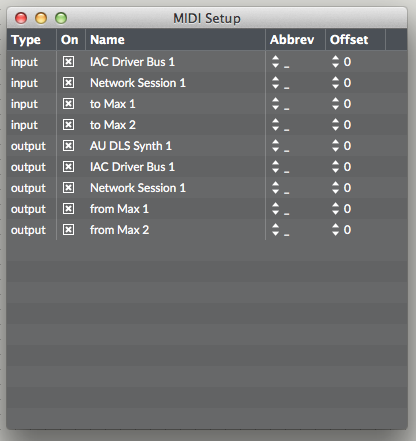 About the MIDI Setup Window:

Name shows the name of any MIDI devices currently available. Note that MIDI devices must be connected prior to starting the Max application in order to be available for use.

The Abbrev and Offset columns contain pop-up menus listing the current abbreviation and channel offset associated with a MIDI input or output device.

Max uses an internal DLS Synthesizer supported by your Macintosh or Windows OS as its default MIDI output device.

The MIDI Setup window lists the MIDI device names and lets you associate letter abbreviations and ranges of MIDI channels with them. 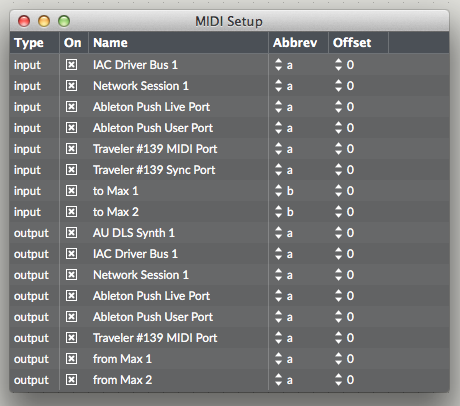 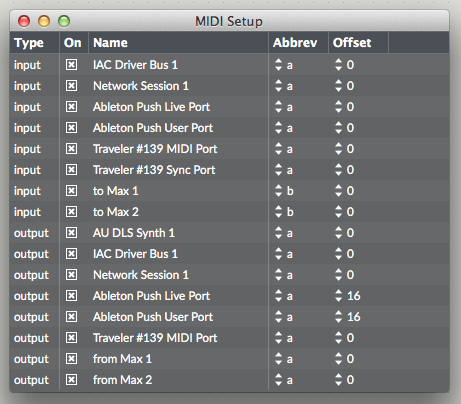 If you create a MIDI output object without specifying a device name, the object transmits MIDI to the first device (the default) in the list of output devices in the MIDI Setup window.

On the Macintosh, the default MIDI output is an AudioUnit DLS synthesizer. The AU DLS synth supports its own set of internal sounds as a General MIDI bank, and also provides support for Level 2 SoundFont files.

If you don’t assign MIDI input or output to a specific destination or port (i.e., one that does not have a MIDI device name or abbreviation as an argument) , Max will automatically merge all input devices. This is useful if you want to treat all MIDI input identically regardless of its source, But this also means that the only way for a Max patch to determine which device is actually the source of input to these objects is to compare the incoming MIDI channel number to the MIDI channel offset specified for each device.

Note: The midiin object is an exception to this behavior — if you don’t use an argument to specify a device, it receives data only from the first device in the input device list. When multiple devices share the same letter abbreviation, Max will use the first one in the list at the time a MIDI input or output object is created with that abbreviation as an argument. Changing the abbreviations of devices has no effect on pre-existing objects, although it will have an effect on the meaning of subsequent port messages sent to MIDI output objects with abbreviations as argument.