Node For Max - Anatomy of an N4M Patch

The Anatomy of a N4M Patch

The Basic Parts of a Node for Max Patch

You can think of Node/node.script as a kind of sidecar for your Max motorcycle. It’s a separate application process which lives and runs alongside your Max patch.

There are three components that make up a N4M patch: 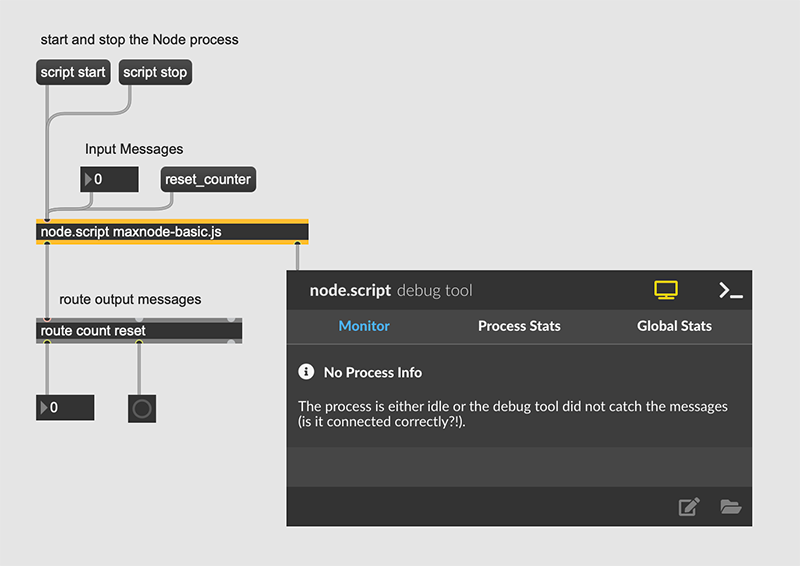 Note: Unlike the standard Max js object which holds the contents of a Javascript file in Max/s program memory, the node.script object must execute from a separate text file on disk.

Each node.script object in your Max patch contains a valid Node JS program written in Javascript. The version of the JavaScript language supported by node.script includes recent additions and features to the EcmaScript standard. For a quick overview on recent language features see this cheat sheet: https://mbeaudru.github.io/modern-js-cheatsheet/ For a full list of supported features based on the current Node version please refer to http://node.green.

A node.script JavaScript program usually has the following parts:

Control messages sent to a node.script object can be easily identified: they always begin with a script prefix. These messages communicate with the node.script process manager, rather than the Node script which is run by Node for Max.

Output Message Handling is composed of the Max patching you create to handle the messages sent out the left outlet of the node.script object. You’ll usually use a Max route or routepass object to handle that message output in your patching.

It is possible to output messages from within the JavaScript context of node.script directly to your Max patcher using the max-api module.

Monitoring and node.debug messages provide status and error messages that keep you informed about what’s going on in the Node Program itself. The node.script object sends lifecycle messages, information and events out of the rightmost outlet in the form of Max dictionaries.

Note: The form of the lifecycle dictionaries is somewhat complex (as documented here ). To make monitoring easier, you can use node.debug , which covers all the received messages and shows all status information, stdout/stderr logs and other data in an easier to use UI.