GenExpr is the internal language used by gen patchers. It is used to describe computations in an implementation agnostic manner. To perform actual computations, it is translated into machine code for the CPU or GPU by the various Gen objects ( gen, gen~, jit.gen , etc.).

The GenExpr language can be used directly in gen patchers with the expr and codebox objects. These objects analyze the expressions written in them and automatically construct the the appropriate number of inlets and outlets so that patchcords can be connected to the computations described within.

Note that there is absolutely no difference in terms of performance between describing computations with object boxes and the GenExpr language. When a gen patcher is compiled, it all gets merged into a single representation, so use the approach that is most convenient for the problem. 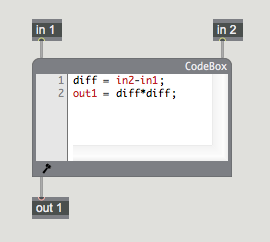 The Gen Patcher and the codebox Object

The GenExpr language is designed to complement the Max patching environment within Gen patchers. It provides a parallel textual mechanism for describing computations to be used in concert with the graphical patching paradigm of Max. As one example, the structural elements of user-defined GenExpr functions correspond closely to the structural elements of Max objects with their notions of inlets, outlets, arguments and attributes. Furthermore, the GenExpr language has keywords in, in1, in2, … and out, out1, out2, … that specifically refer to the inlets and outlets of the expr or codebox the GenExpr code is embedded in.


Adding a codebox to a Patch and Compiling It 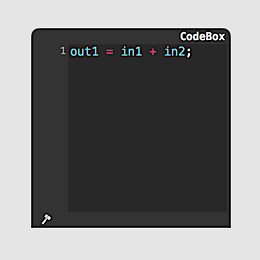 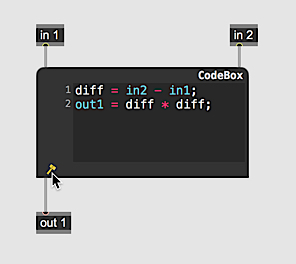 The GenExpr language’s syntax resembles that of C and JavaScript for simple expression statements like those in the codebox above, however, semicolons are only necessary when there are multiple statements. The codeboxes below all contain valid expressions in GenExpr. When there is a single expression with no assignment like in the far left codebox, the assignment to out1 is implied. Notice that it also doesn’t have a semicolon at the end. When there is only one statement, the semicolon is also implied.

The expr operator is functionally the same as a codebox but lacks the text editor features such as syntax highlighting and multi-line text display and navigation. expr is most useful for short, one-line expressions, saving the effort of patching together a sequence of objects together that operate as a unit.

An expr or codebox determines its number of inlets and outlets by detecting the inN and outN keywords where N is the inlet/outlet position. in1 and out1 are the left-most inlet and outlet respectively. For convenience, the keywords in and out are equivalent to in1 and out1 respectively.

Almost every object that can be created in a Gen patcher is also available from within GenExpr as either a function, a global variable, a declaration, or a constant. The number of inlets an object has corresponds to the number of arguments a function takes. For example, the object atan2 has two inlets and takes two arguments as follows:

Parameters declared in GenExpr behave just like param operators in a patch. They can only be declared in the main body of GenExpr code where inlets and outlets (inN and outN) exist because they operate at the same level as object box Gen operators in the patcher. 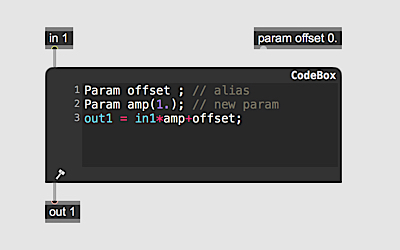 Just as object boxes can have multiple inlets and outlets, function in GenExpr can take multiple arguments and can return multiple values. The object cartopol has two inlets and two outlets. Similarly, in GenExpr the cartopol function takes two arguments and returns two values. In code, this looks like r, theta = cartopol(x, y). Functions that return mutiple values can assign to a list of variables. The syntax follows the pattern:

When a function returns multiple values but assigns to only one value, the unused return values are simply ignored. When a return value is ignored, the GenExpr compiler eliminates any unnecessary calculations. The function cartopol could be expanded out to

If we remove theta and have instead

the compiler simplifies it to

In the reverse case where we only use theta, the Gen compiler will strip out the calculations for r

Even for more complex examples where the outputs share intermediate calculations, the compiler eliminates unnecessary operations, so there is no performance penalty for not using all of a function’s return values.

If there are more values on the left-hand side than on the right-hand side, the extra variable names are given a value of zero.

The second return value gets discarded and cartopol is optimized:

Here cartopol returns both values, since it is in the last position:

The same principle applies when expressions are used as arguments to a function call. In this example, the two output values of poltocar connect to the two input values of min:

Defining new functions in GenExpr happens in much the same way as other familiar programming languages. Since there are no types in GenExpr function arguments are specified simply with a name. A basic function definition with an equivalent patcher representation looks like the following. Note that functions must be declared before all statements: 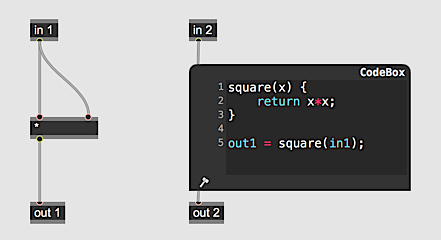 The cylinder operator in Jitter Gen objects is defined as:

While simple functions in GenExpr can be easily patched together, more involved functions like the above cylinder definition start to become unwieldy, especially if the function is used several times within the GenExpr code. This is the advantage of textual representations.

In Gen patchers, some objects have attributes like the Jitter Gen operator sample, which as a boundmode attribute. In GenExpr, function arguments correspond to operator inlets and function return values correspond to outlets. Attributes are set using a key/value style argument. For example:

will use a version of the sample operator with a mirroring boundary behavior. The attribute is set with boundmode as the key and "mirror" as its value. Since the concept of Max messages doesn't exist within Gen patchers, attributes for built-in operators are not dynamically modifiable. This holds equally in GenExpr. Such attribute values must be constants. If the attribute takes a numerical value, it cannot be assigned to from a variable.

As with built-in operators, attributes of function definitions can be set with key-value syntax. In the above example, the amp attribute is given a value of 0.5 while the offset attribute is given a value of in1*2, which is an expression that is not constant but valid because func is a function definition. Note, however, that the offset attribute has minimum and maximum values defined, so any expression assigned to it will be clamped to that range.

Structurally, GenExpr functions are equivalent to Gen patchers. Both can have inputs, outputs and named parameters. In GenExpr, Gen patchers save as abstractions (.gendsp or .genjit files) can be used as functions. When the GenExpr interpreter encounters a function it can't find the definition of, it will use the current Max search paths to look for a Gen abstraction with the name of the function.

For example, if I have the code:

When defining operators in GenExpr, it can be handy to keep them in a separate file so that they can be reused frequently without having to constantly re-type the operator definition in a codebox. To include GenExpr operators defined in a separate file, use the require operator. The require operator takes the name of a .genexpr file and loads its definitions. The following are all valid ways to require a .genexpr file:

In the above code, calling require triggers the codebox to look for the file 'mylib.genexpr' using the Max search paths. Required .genexpr files can also require other files. If a file is required more than once, it will only be loaded once.

GenExpr files can be created and edited using the built-in Max text editor. If a GenExpr file is required in a gen object and the file is edited and saved, the gen object will detect that a file it depends on has changed through filewatching and recompile itself to reflect the new changes.

Branching and looping is supported in GenExpr with if/else, for and while constructs. if statements can be chained together using else if an arbitrary number of times such that different blocks of code will be executed depending on different conditions. For example:

Note that in the Jitter gen objects, if statements with vector-valued conditions will only use the first element of the vector to determine whether a block of code should be tested or not.

while loops in GenExpr are similar to those in many other languages:

for loops are also similar to this in many other languages although there is no ++ operator in GenExpr to increment a loop counter. Instead, += can be used:

Since GenExpr is compiled on-the-fly, it can be easy to make a programming mistake and create an infinite loop. All of the gen objects have protections against infinite loops, so while an infinite loop might slow things down, it won't cause Max to get stuck and freeze.

Also, note that in many cases values in GenExpr are floating point, even loop counters. Floating point numbers can't exactly represent every number, sometimes a little fudge factor to account for this might be necessary. For example, this loop:

will likely not reach 1.0 despite the <= operator because of floating point precision. Instead, write something like:

to ensure that the i variable goes all the way to 1.

With looping constructs, GenExpr supports break and continue statements. break causes an early exit from a loop while continue causes the loop to start the next iteration without finishing the current one.

Jitter Gen objects take both Jitter matrices (jit.matrix) and/or textures (jit.gl.texture) depending on the object. Within the Gen patcher the operator in represents both the input matrix or texture in its entirety and the current cell of that input being processed. In most cases, the in operator represents the current cell being processed. The only time where it represents the entire input is with the sample and nearest operators. Only an in operator can be connected to the left input of sample and nearest, which are used to grab data from arbitrary locations within the input. The same holds true when sample and nearest are used in GenExpr. 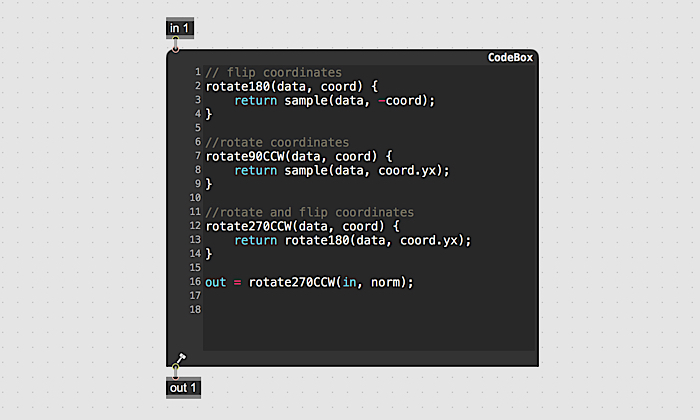 When GenExpr code is compiled, the inputs to sample and nearest are validated to ensure that their first arguments are actually Gen patcher inputs and an error thrown if this isn't the case. The validation process can track inputs even through function calls so sample and nearest can be used within functions without issue.

The coordinate operations in Jitter Gen patchers (norm, snorm, cell, and dim) are special-case operators that are a hybrid betwen operator and global variable. There are two equally valid syntaxes for using these operators:

GenExpr is a type-less language. Variables are given types automatically by the compiler depending on the Gen domain and the Gen object’s inputs. Gen variables are also local-to-scope by default so they don’t have to be declared with a keyword like var as in JavaScript. Note that GenExpr has no array notation [index] as there is currently no notion of an array structure.