There are two basic methods of dynamic routing for multichannel signals:

mc.send~ and mc.receive~ are multichannel versions of send~ and receive~. An important limitation when using these multichannel versions is that you must expicitly define the number of channels you will be communicating between the objects via a typed-in argument that follows the receive name. The mc.receive~ cannot change its number of channels dynamically.

Any mc.send~ objects with a matching name can send up to the defined number of channels in the mc.receive~. If you try to send too many channels, the extra channels in the multichannel signal connected to mc.send~ are ignored. If you send too few channels, the additional channels come out the mc.receive~ set to zero. In other words, mc.receive~ always produces a multichannel signal containing its defined number of channels regardless of what you send it via mc.send~. 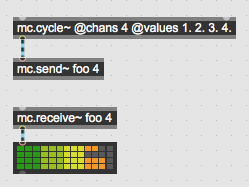 If we send set bar to the mc.receive~, the output is still four channels despite the fact that mc.send~ with name bar is only sending two channels.

As objects that use the MC Wrapper, mc.gate~ and mc.selector~ work similarly to their single-channel counterparts: 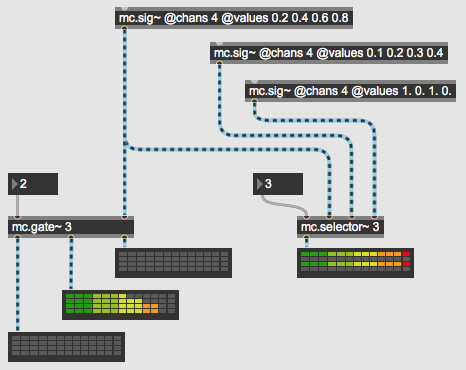 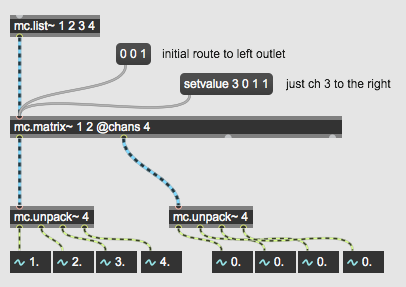 Using the setvalue message to the wrapper, we can assign only the third channel of the input multichannel signal to the right outlet using the message setvalue 3 0 1 1. 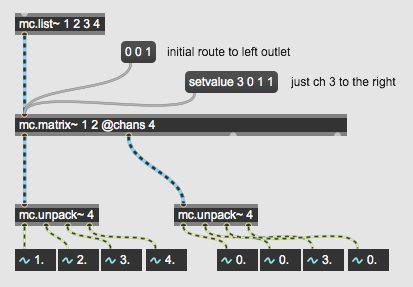 Note that the matrix~ object numbers its channels starting at 0 whereas mc.target and the MC Wrapper setvalue message start channel numbering at 1. This is because a target of 0 will address all instances inside a wrapped object.

The mcs.matrix~ object is a single matrix~ object where all the signal inputs are combined into one multichannel input and all the signal outputs are combined into one multichannel output. To duplicate the above example with mc.matrix~ in mcs.matrix~, first observe that there are four total inputs and eight total outputs, despite the arguments 1 2 to mc.matrix~. To match this, we need an mcs.matrix~ with arguments 4 8: 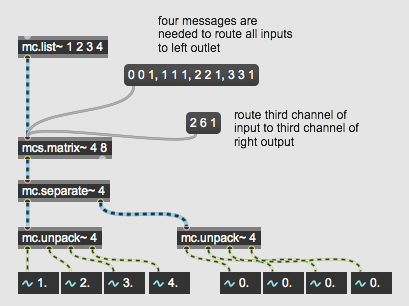 To route the third channel of the input in the same way, we send the message 2 6 1 (remember matrix~ channels are zero-relative): 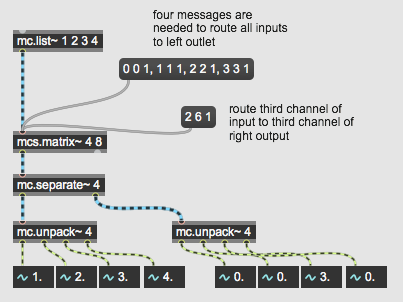 Generally, you'll prefer mc.matrix when you want to route multichannel signals as a whole to different patch cords. This can be achived in one message with the mc.matrix example: 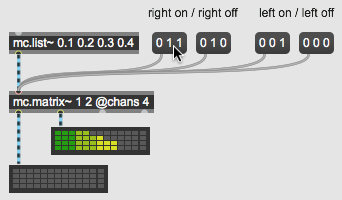