Similarly, the output fed to out~ objects in a patcher inside mc.poly~ is not mixed with the other patchers, it comes directly out to the corresponding channel of a multichannel signal.

Here is a patcher that simply passes audio input arriving at an in~ directly an out~: 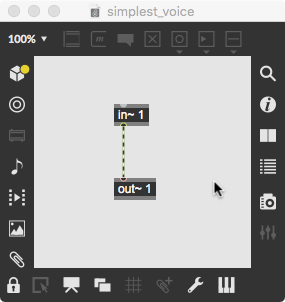 Here is a comparison of poly~ and mc.poly~ using simple numbers as input to four instances of this patcher loaded in each object. For the poly~ case, we feed a single-channel signal of 1 to the object and it produces a single-channel output:

Note that the output is 4, representing the sum of all the patchers mixing their inputs together.

For the mc.poly~ case, we will feed in a four-channel multichannel signal consisting of 1 in the first channel and 0 in the other three channels. 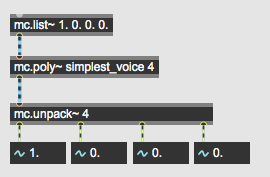 One use of mc.poly~ would be to load a simple patchers to use as an audio effect operating in parallel on each channel of a multichannel signal. If you want to mix the output of all the effects, you can do that later with mc.mixdown~ or mc.op~. 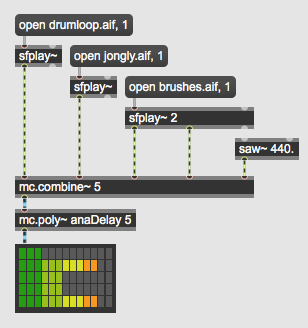