Suspending execution of a patcher

Many of the buttons in the toolbar have corresponding menu items in the Debug menu. You may find it easier to use the menu items, particularly the keyboard equivalents.

Each row in the debug window shows a message being sent from a sending object to receiving object. The sender, receiver, message, and arguments are displayed. The row highlighted in green is the message that will be sent next when you invoke the Step command. The current list of rows in the debug window is an execution stack. In other words, each object is sending a message in the middle of receiving an object.

This sequence continues until we get to the current execution point shown, where the pack object is about to send a list to the table object. The patch below shows the breakpoint where this will happen in red. 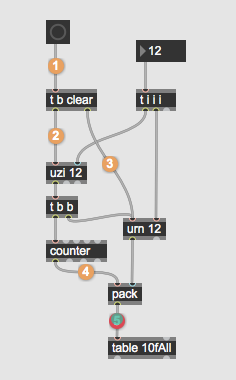 As you step through the patch, you will observe the execution stack grow and shrink.

When the execution of the patch has reached a point where Max is waiting for user input, there will be nothing left in the debug window display, which means the execution stack is now empty.

If you are in the middle of debugging, you cannot operate your patch. In addition, you cannot close the patcher window being debugged, and you cannot quit Max. If these actions interest you more than the debugging process, choose Abort from the Debug menu, and you will be able to operate Max normally again.