This is a list, sorted alphabetically, of discontinued objects, or changes to object features or messages in Max 8.

There were some inconsistencies in the line objects timing and message generation. There are three primary differences in the versions of the Max 8 line object:

If you have patches that are dependent on the old behavior, you can use the compatmode message or attribute to return to the previous behavior. 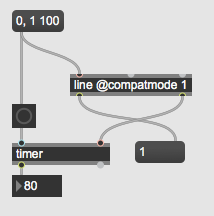 By default, compatmode is off for newly instantiated line objects.

With the release of Max 8 as a 64-bit only application, the use of Quicktime has been deprecated. This also means that objects that depended on the availability of Quicktime have been discontinued. This includes:

Objects that create contexts (such as jit.world, jit.window, and jit.pwindow) are now created with sharing enabled by default.

If present, jit.grab will open the FaceTime video device by default on Macintosh computers.

The @fsmenubar attribute is no longer functional, and enabling fullscreen on jit.window will always hide the menubar. Use the Max messages hidemenubar and showmenubar for equivalent functionality.

On Windows, jit.world now defaults to drawing at 60 frames per second.