MC includes a number of objects that are useful for combining, separating, and transforming multichannel signals. The objects do not use the "MC Wrapper"; rather, they are made to work with wrapper-based objects.

Note that signals are not mixed together. 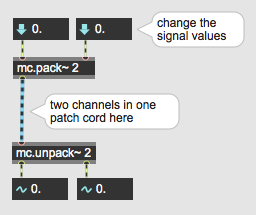 If you want to create a multichannel signal from numbers, you can also use the wrapper-based object mc.sig~ or the even simpler mc.list~. 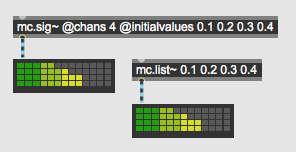 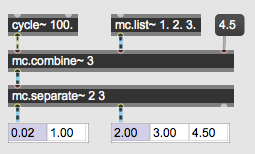 To make a multichannel signal that copies a single-channel input, use mc.dup~. The argument specifies the number of copies produced.

To force a multichannel output to have a set number of channels, use mc.separate~ with one argument specifying that number of channels. Additional channels are split off to the right outlet, but you don't need to connect that outlet to anything. If there are fewer channels in the input than you specify in the argument, the output will be padded with zero signals. 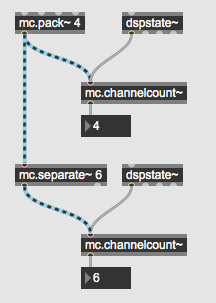 To mix all channels of a multichannel signal to fewer channels, use mc.mixdown~. mc.stereo~ is a stereo-specific version of the mc.mixdown~ object. A single mixed channel can be obtained by using mc.op~ with the op attribute set to the sum operator.

MC includes several objects that you can use to change how channels within multiple multichannel patch cords are organized, including mc.interleave~, mc.deinterleave~, and mc.transpose~. Some applications of these objects are described in our discussion of multichannel signal topology.