jit.gl.lua embeds the Lua scripting language inside a Jitter OpenGL object. jit.gl.lua serves as both a general purpose Lua scripting object and a 3D graphics scripting object. It is very similar to the js object for JavaScript with the addition that OpenGL commands can be used directly. OpenGL is what Jitter uses for 3D graphics rendering. Normally, access to the 3D drawing functionality is wrapped in higher level jit.gl objects (e.g. jit.gl.gridshape). jit.gl.lua however exposes OpenGL directly in its scripting environment for more precise, dynamic control over OpenGL's 3D drawing commands.

The Lua scripting environment inside jit.gl.lua interacts with Max and Jitter in two ways: through patcher messages and through commands from Jitter's OpenGL rendering system. If you have done Lua scripting in other contexts, that knowledge is directly applicable to working with jit.gl.lua. jit.gl.lua simply adds extra functionality to the standard Lua environment, and this is what is covered in this documentation. For more information on Lua, visit the Lua homepage. For documentation on the OpenGL commands, what they do, and how to use them, please visit the OpenGL website. Of particular note are the OpenGL man pages, which are available for each command. They explain what type of arguments a command requires, what it does, and any possible errors that may arise from improper use. 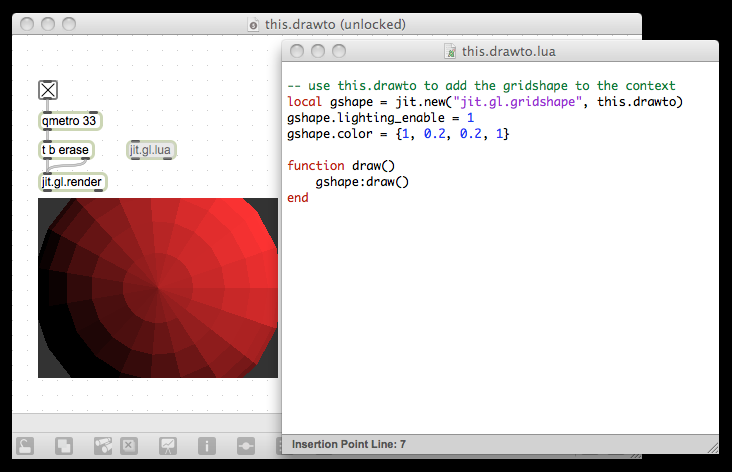 When other jit.gl objects are created in a script, they too have to belong to a context, so we typically attach them to the same context as the jit.gl.lua object, which can be accessed by referring to this.drawto.

Global functions in jit.gl.lua can be called by sending messages to the jit.gl.lua object. If a script contains the code

sending the message apply to a jit.gl.lua object will call the function above.

If the message is followed by any extra strings or numbers, these will be passed as arguments to the function. While a function can have any name and be called by a message, there are a few function names that have special significance. There are two groups of these functions: one for handling patcher input and another for Jitter OpenGL messages.

The patcher handling, the functions are float, int, list, loadbang, closebang, and scriptload.

When a number is sent to a jit.gl.lua inlet, the float messages is called and passed the value. When an integer is sent, the int message is called. Similarly, a list of values triggers the list function with the elements of the list set as arguments to the function. The list can be captured into a table by using the Lua idiom

Since jit.gl.lua has dynamic inlets and outlets, whenever the inlets or outlets attriubutes are set, the change is immediately reflected in the patcher.

Lua has a single number type, so integer and float inputs are both converted to a Lua number. When an input is sent to an inlet, jit.gl.lua's last_inlet attribute is set, allowing a script to determine what inlet a message was sent to so that inlet-specific behaviors can be designed if needed. 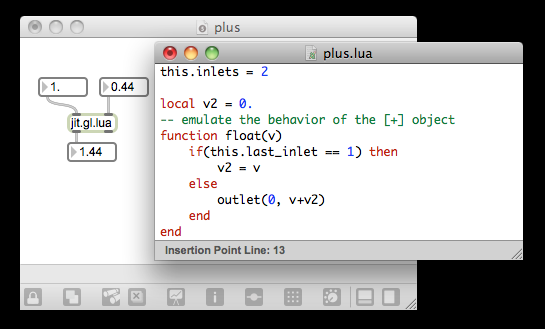 In the script above, the last_inlet attribute of jit.gl.lua is used to save the input number when it comes in the right inlet. When input comes in the left inlet, it triggers an addition operation and the result is sent out the outlet.

Outlets in jit.gl.lua are accessed through the outlet function. outlet takes two or more arguments. The first argument is the outlet index with 0 as the left-most outlet. The other arguments are the values to be sent out the outlet. Outlets can be sent both string and numerical values. If a numerical value is an integer, jit.gl.lua will convert it to an Max integer type, otherwise it will be a Max float type.

Jitter objects can be created in a jit.gl.lua script using the jit.new function. When called, jit.new will create and return a Jitter object. The arguments to jit.new are the classname of the object and any additional arguments that the object's constructor might take. For example, to create a jit.xfade object:

to create a jit.gl.gridshape object:

Once created, the messages and attributes of the object are exposed to Lua in the usual Lua fashion. In Lua, functions belonging to an object are called using the ':' operator, which is a kind of object-oriented syntax sugar. This operator passes the object itself in as an implicit first argument.

All Jitter object messages can be called this way. Attributes are acessed more like properties stored in a table and can be accessed using the '.' operator. For example:

Certain Jitter objects such as jit.window send messages out an outlet in response to patcher and user events. Since Jitter objects in scripts have no outlets, this information has to be accessed another way. In jit.gl.lua, the jit.listener object is used to attach to an object and listen to any notifications it may send out.

jit.listener takes two arguments: the name of the object to listen to and the function to call when the listener gets notified of some information. The second argument can either be a function directly or the name of a global function. This code is equivalent to the code above:

Notice that the second argument in this code is a string naming the function to call as opposed to the function itself.

In addition to the low-level OpenGL bindings discussed below, jit.gl.lua has bindings to Jitter-specific OpenGL functionality for working with Jitter textures and jit.gl objects at a lower level than usual.

jit.gl.bindtexture and jit.gl.unbindtexture are used to bind and unbind texture. The first argument is a texture name and the second argument is the texture unit to assign the texture to. Every graphics card has a fixed number of slots called texture units. The number of texture units a card has determines how many textures can be used simultaneously. This number is usually 8 but can be 16 or even 32. To see how many texture units your card has, go to the Options Menu > OpenGL Status. Under the OpenGL Limits > Textures item, you'll see MAX_TEXTURE_UNITS and a value next to it. This is the number of texture units your card supports.

jit.gl.begincapture and jit.gl.endcapture are used to render drawing commands to a texture instead of to a window. The only argument is the texture name.

jit.gl.worldtoscreen converts world coordinates into screen coordinates. jit.gl.screentoworld performs the inverse operation, converting screen coordinate into world coordinates. Both functions can take either a table of values or a list of x, y, z values. The z-coordinate in jit.gl.screentoworld is typically a value in the range [0, 1] where 0 represents the near clipping plane and 1 the far clipping plane, which can be used to cast a ray into the OpenGL scene as the code below demonstrates:

jit.gl.draw_begin and jit.gl.draw_end operate on jit.gl objects. All jit.gl objects share a set of common attributes know as ob3d (or object 3D) attributes. Whenever a jit.gl object draws itself, it sets up the OpenGL state to reflect the settings of its attributes such as depth_enable and blend among others. When an object is drawn, the following sequence of calls takes place:

The vector math functions in jit.gl.lua are located in the vec module and are organized into six categories. These categories are:

The OpenGL bindings in jit.gl.lua enable direct access to OpenGL commands. Nearly all of the OpenGL commands are available through the bindings. Wherever possible the arguments to an OpenGL function in Lua match the arguments described in the OpenGL man page for that command. Since OpenGL is a C interface, type information and the number of arguments a command must take are fixed. Lua does not have this restriction, so in an effort to simplify the interface into OpenGL, functions that only vary based on type and the number of arguments have been collapsed into a single function. For example, the OpenGL command for specifiying a vertex of geometry as the following variations:

In Lua, all of the variations are contained within a single function:

In OpenGL, enumerations play an important role for specifying different modes of behavior. An enumeration is simply a number with a particular meaning. For example, OpenGL has a lot of functionality that can be enabled and disabled such as depth testing, blending, etc. To enable or disable a particular bit functionality, an enumeration specifiying the functionality is passed to the glEnable or glDisable command. In C this looks like:

The Lua bindings for OpenGL also have enumerations. These are stored in the same location as all of the OpenGL functions, which is simply a giant table. Often times it is convenient to have the Lua code look as much like the C code as possible so that when copying example code or switching between C and Lua there is minimal cognitive overhead. We can do this by aliasing the OpenGL module table to the variable 'GL'. When jit.gl.lua loads a script, it autmatically makes available the opengl table, which contains all of the OpenGL functions and enumerations. The following idiom allows us to write code that more closely resembles C-style OpenGL code:

In addition to the OpenGL module, jit.gl.lua also has a color module built in. The color module contains funtions for translating betwee RGB space and Hue-Saturation-Luminance (HSL) space. It also contains a large number of pre-defined color values. The color values are given in RGB form. Here are some examples:

There are 115 colors in total. For the full list, see the jit.gl.lua Color Bindings documentation.

The main functions in the color module are RGBtoHSL and HSLtoRGB. While colors in both spaces are defined by three values, an optional fourth value representing the alpha channel can also be passed in. The alpha channel is not involved in any of the calculations, but is simply passed through untouched.

For example, the code below converts an RGBA color to an HSLA color, lightens it, and then gets back the result into RGBA space.

The other three functions in the color module are for manipulating HSL colors. They are designed so that the color manipulation functions can be chained without having to assign any results to a variable. These functions are hue, saturate, and lighten.